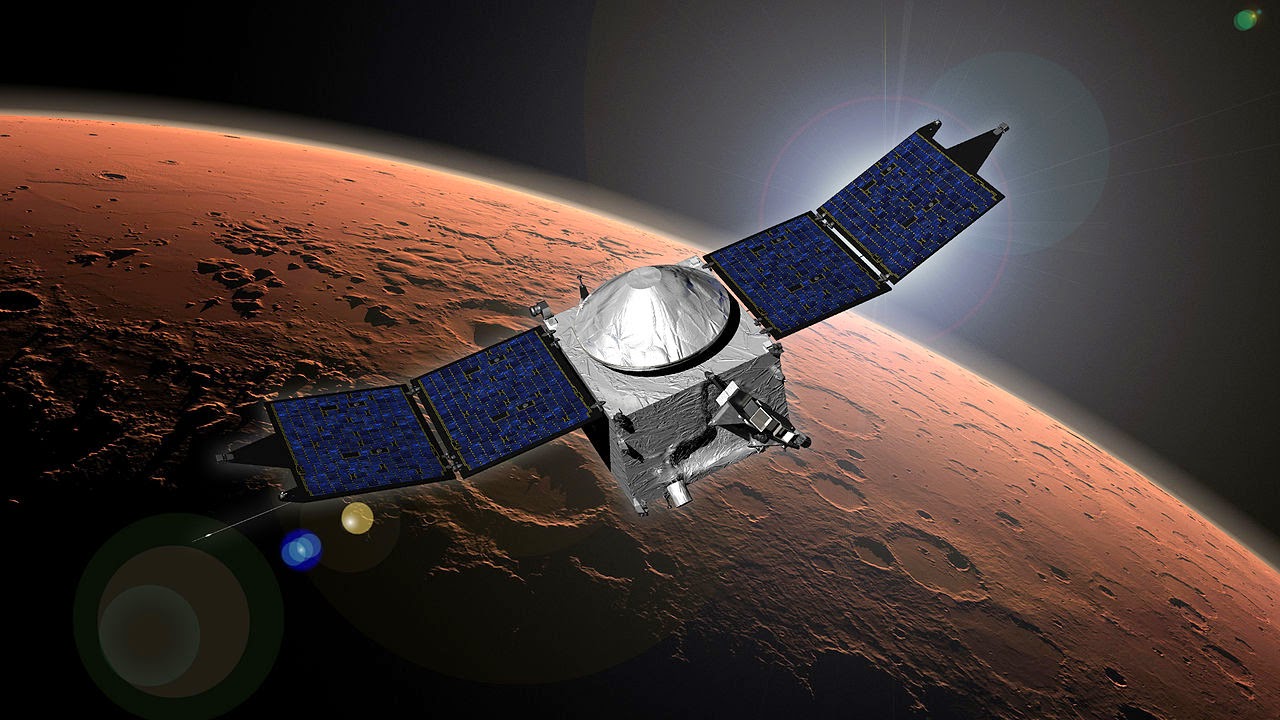 Now that MAVEN has reached its destination, it will go through a series of shaker-downs in the next 6 weeks as mission control transitions the craft from a highly elliptical capture orbit that takes 35 hours into its much closer and conventional science orbit, which will last for about 4 ½ hours.

Once MAVEN is ready to go, it will be tasked the following mission objectives:

To help MAVEN achieve these objectives, it is packed with instruments that fall into 3 general categories:

As for why we should even care at all, scientists believe that Mars was once very similar to Earth at a point in its distant past. However, for reasons that are still unknown, the planet lost its atmosphere and transformed from a habitable, Earth-like world into the barren, cold desert planet that it is today. For us here on Earth, understanding the mechanism of how this happened could not only help us better understand our atmosphere on Earth but, in the future, possible terraform Mars into a world that is once again habitable. 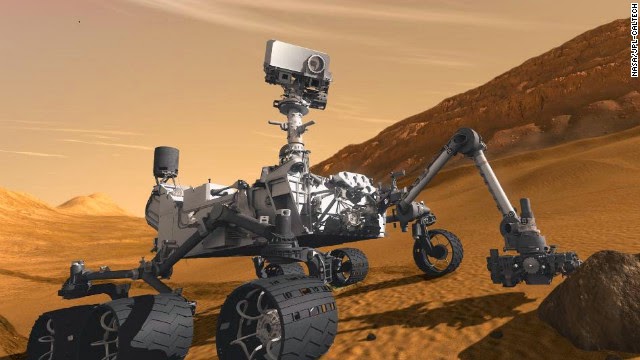 It's been two years since NASA landed its $2.5 billion Curiosity rover on Mars and, according to a review board at NASA, there's very little to show for it. At the start of this month, NASA's senior planetary review board issued a scathing report on the progress of Curiosity, saying that the mission “lacks scientific focus” and that the team as a whole exhibits an attitude of nonchalance, seemingly secure in the belief that the rover's $2.5 billion price tag protects it from criticism. In short, the panel said that the rover was doing too much driving and too little science and recommended that the team essentially drive around less, do more in-depth science when the rover stops, and articulate a clear science agenda for the future rather than use the rover as a cosmic sight-seer. 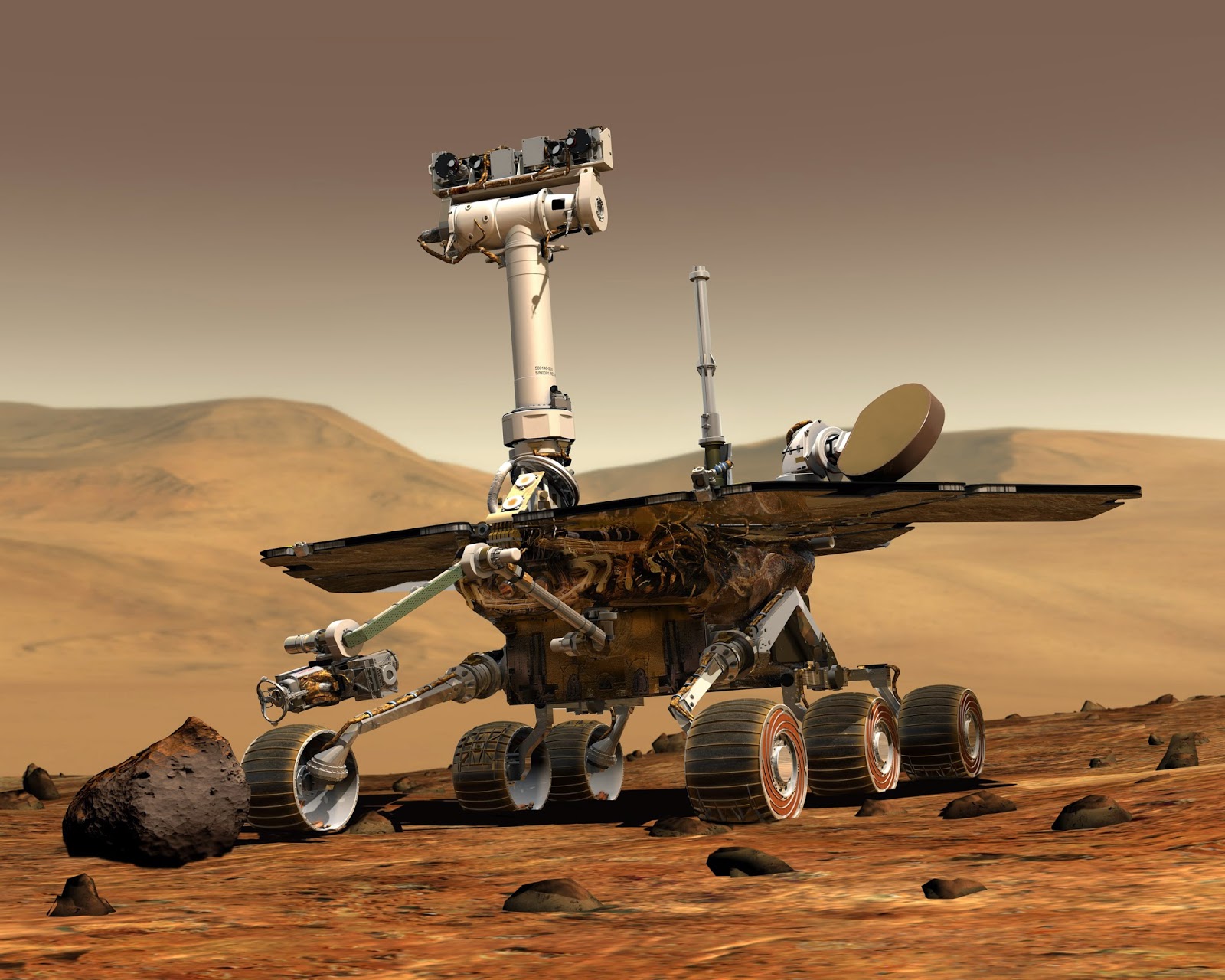 The Opportunity rover, now in its 10th year and 25th mile on Mars (not bad for a robot with a 90-day design life) has just had its memory reformatted and is now ready to get on with its next objective: drive to Marathon Valley and suspected clay deposits. The key here: clay only forms in water and the search for past evidence of water on Mars is a major focus of the mission. The same review panel that slammed Curiosity also weighed in on Opportunity, saying that the rover was still clearly capable of doing science while expressing concern over its computer. Well, software fix complete, it appears that Opportunity has a clean bill of health. Here's to another 10 years and the next 25 miles!

If you found this informative (or at least entertaining), help me pay my bills and check out my Examiner pages for space news, cleveland photography, national photography, and astronomy for more great stuff.


For something even better, follow this blog.
Posted by Dennis Bodzash at 11:31 AM No comments: 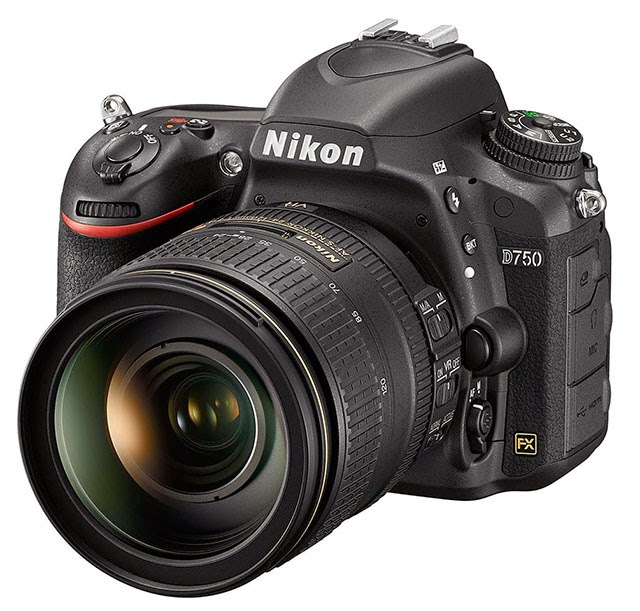 Nikon has just announced the D750 which, upon looking at its name, appears to be a successor to the 2008's wonderful (and in my opinion, still unsurpassed for well-roundedness) D700. The only problem here: unlike in 2008 when there was only the D700 for FF half-height bodies from Nikon, now there's more half-height FF Nikons than one can shake a stick at.

So, which is best on the spec sheet? Well, let's have a look!

Now, how does the 5DIII kill them all? Answer: Canon as a single ultimate camera in this price range, while Nikon has 5 now.

In Nikon's lineup, there are several choices here. If speed is your thing, then there's the D750, which has the fastest inherent frame rate of any camera on the list. Do you want ultra-high resolution? Well, there's the D810. Cost a primary concern? Well, there's the D610. Looking for high ISO performance (not to mention a cool look)? Well, then there's the DF. If cost is your primary concern, the venerable D700 is for you. Canon? Well, the answer to all these questions of what to buy for Canon shooters is the 5D Mark III. There's no give and take, here, there's no giving up one feature in favor of another. With Canon, they've put all their eggs (and efforts) into the basket that is the 5D Mark III. Essentially, Canon is doing now what Nikon did with the D700 6 years ago: building a camera that doesn't force buyers to make compromises on capabilities.

Why not check out other great stuff about photography, astronomy, and associated gear?

Think others would find this useful (or at least entertaining)? Share with the buttons below!
Posted by Dennis Bodzash at 10:57 AM 1 comment:

A Blast From the Past: September 5, 1997 Weekly Reader: Pathfinder/Sojourner on Mars 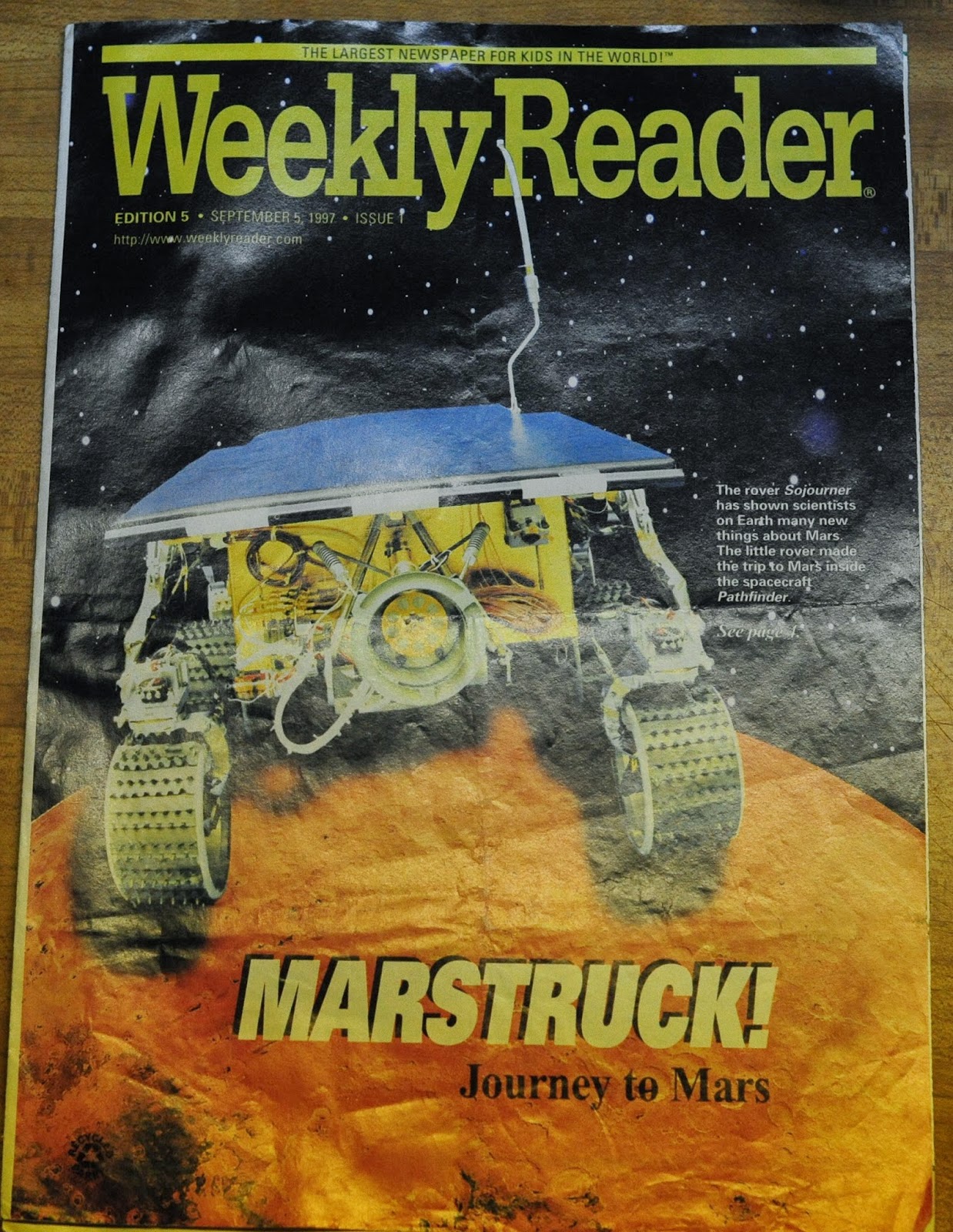 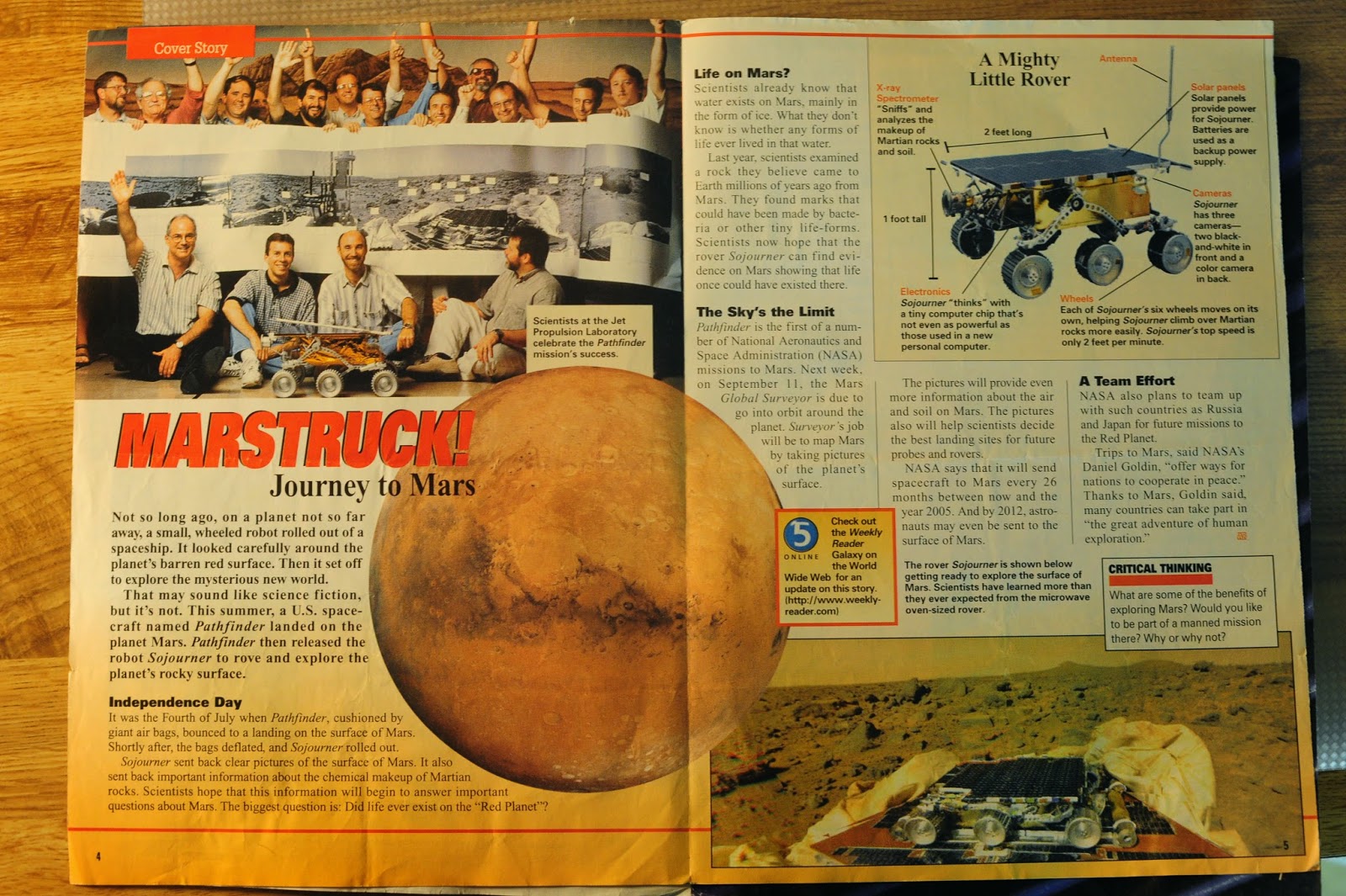 While rooting through some old junk the other day, I came across a rather interesting historical artifact: a Weekly Reader kid's newspaper from 5th grade that had somehow escaped destruction.

The year was 1997: The front page story: The Pathfinder/Sojourner mission to Mars.

For anyone not familiar with the mission, Pathfinder/Sojourner paved the way for many later missions to Mars, Launched in 1996 and arriving on July 4, 1997, this mission was questionably the most anticipated space mission since Apollo 11 landed on the Moon in July, 1969. The first NASA mission to land on Mars since the Vikings, this mission was the first time a mobile vehicle landed on another planet and the first to employ airbags as a method of landing and an automatic obstacle detection/avoidance system. Though it had a designed lifespan of 1 month, Sojourner lasted for over 3 months on Mars, transmitting a wealth of data, surpassing all mission expectations, and serving as the basis for the more advanced Twin Mars Exploration Rovers (Spirit and Opportunity) and Mars Science laboratory (Curiosity) missions.

As another point to ponder, consider this: much of the class of 2015 (starting their senior year in high school as we speak), was born in 1997. For today's high school seniors, consider that, in their lifetimes . . .

Carl Sagan has always been dead, as have been George Burns, Ella Fitzgerald, Tupac Shakur, JonBenet Ramsey, and Tiny Tim

Cloning has always been science fact

Computers have always been capable of beating humans at chess

Mad Cow Disease has always been a threat to human health

'Unabomber' Ted Kaczynski has always been in jail

The Keck Telescopes have always been in operation

The Daily Show has always been on the air

Bill Gates has always been the richest man in the U.S. (and the world, depending on the year)

The Ramones have always been retired

The Big 12 Conference has always existed

Fox News has always been on the air

Bosnia and Herzegovnia have always been a single country

There has never been a one term president

The Nintendo 64 has always existed

Prince Charles and Princess Diana have never been married

Interesting stat:
In 1997: Weekly Reader reported that only 46% of schools in America were wired for Internet access. Needless to say, that's hard to believe in 2014, when just about every fast food joint has free wireless internet (wi-fi was in its infancy in 1997).

Failed Prediction:
The article stated that humans may travel to Mars by 2012. As of 2014, the target date for a manned mission is the mid 2030s.

In the News on September 5, 1997 . . .
The International Olympic Committee selected Athens, Greece to host the 2004 Summer Olympics

As for Weekly Reader . . .
It ceased production in 2012 (the same year we were supposed to be going to Mars back in 1997) after being bought out by the educational material printing company Scholastic.

Sorry if this makes you feel old, as it does me in a way as this year marks a decade (10 years) since I began my senior year of high school, but it's always fun to look back in time and see where we were X-years back.

Who knows, more time machine posts may be coming in the future . . .

If you found this informative (or at least entertaining), help me pay my bills and check out my Examiner pages for space news, cleveland photography, national photography, and astronomy for more great stuff.

For something even better, follow this blog.
Posted by Dennis Bodzash at 3:37 AM No comments: 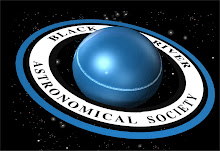